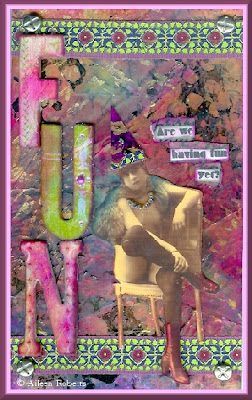 Here's a piece I made using HP 4x6 photo paper and Color Mists. I sprayed the Color Mists on and then heat set it...added some torn pieces of vellum script paper I sprayed also with Color Mists. I then added torn pieces of the vellum with Golden's soft matte gel medium. Once that was dry I added chalk inks to the bring out more of the color then stamped with Krylon gold leafing pen and also with black gesso. I then added the ribbon braiding, image and lettering.
This background I made again using photo paper
misted with Color Mists 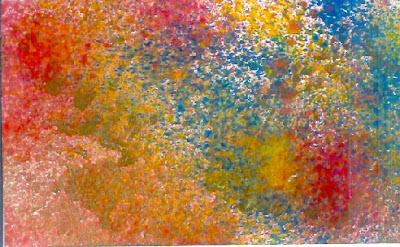 I created this background by stamping first with a chunky zebra striped foam stamp using Posh Impressions Resist on to photo paper and then heat set it for a moment and then sprayed with Color Mists. 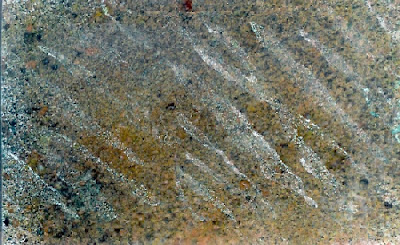 A Picture's Worth a Thousand Words...

I cannot tell you how many times I have been driving and am puzzled by the sight of a lone shoe in the middle of the road....it always leaves me to wonder how it got there and why there was only one...where was it's mate? Is it just me that sees shoes in the roadway or do others notice them as well? How about the shoes tied together thrown over power lines...anyone else notice those also? I've seen my fair share of those too, but never have I come across a pair of boots....not just any boots but nice black high heel boots! LOL imagine my surprise seeing a pair of those dangling from the power lines....the first morning I noticed them I figured some how they would be gone...some one would figure out how to get such a nice pair of boots down surely....the wind came up the next day and by afternoon they had swung clear from the center to the side and there they still hang.....After I took a picture I thought okay from now I'm going to keep a lost shoe journal and take pictures of all the shoes I encounter...of course since I made this proclamation I have not encountered anymore shoes, but it's only a matter of time, I'm sure!

I've been working on several art pieces just haven't finished any to post yet...I did however finish a sign hubby requested for his garage....I owed it to him since I had made him one before and then gave it away ;-)

The saying is from the Wizard of Oz

I was surprised to discover I had been tagged to reveal 7 random things about myself by Joanne Thieme Huffman (thanks Joanne!). I thought okay this will be easy, but actually it was a lot harder then I thought!

1. I use to be a Cosmetology Instructor and loved it but hated the politics.

2. I have DYSCALCULIA a form of Math Dyslexia.

3. In my previous early married life I lived on a farm and we milked 13 milk goats by hand.

4. I love to sing along to the radio in the car even though I can't sing.

5. I'm an early riser and have never slept late and I'm envious of people who can.

6. I have a dream of one day writing an art book geared towards Kids and Teachers.

7. I can 't stop laughing when I'm nervous or stressed.

As I look into my magic gazing ball I tag the following people: 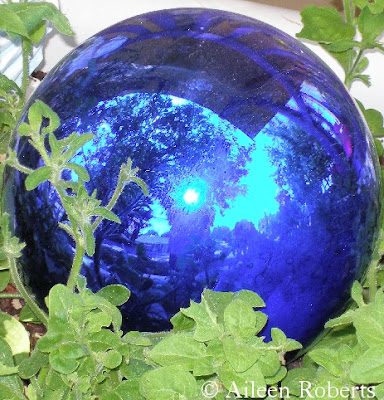 ...so little time...its been awhile hasn't it. I'm sure you all have grown bored with things on here, so time for a little catch up.
Some of you may remember we had our house painted this past fall bright yellow and eggplant. You can see before and after pictures at the link here:
http://www.outsidethemargins.com/alteredhm.html

Below is a picture of my newly painted bench my husband made me from a head and foot board... 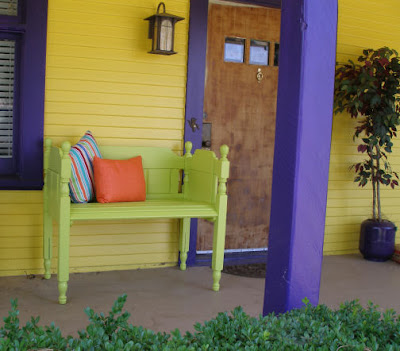 If you check out my altered house photos you can see the before picture of the bench:
http://www.outsidethemargins.com/alteredhm.html

This weekend seemed to be a whirlwind of activities we not only went out once but twice! which is not typical for us we're normally real homebodies. Friday night we went to a local restaurant that features music and listened to a Scottish Rock band that was over from Scotland to perform at some local Scottish Highland games. The group calls themselves Box O' Bananas , kooky name I know LOL but they were awesome! A strange mix of fast tempoed Scottish rock music mixed with a Cajun flavor...yes, I know that's a strange combination LOL not only were they awesome sounding they also we're quite funny!! I must admit I could listen to their Scottish brogue for hours and not grow tired of it! We also enjoyed listening our local piping and drum group.

Saturday Carolyn Rhea ,the comedienne was in town and we watched her perform at the newly renovated State Theater. If you ever get the chance to see her perform do it, she is hilarious!! She kept us laughing throughout the show and then she was gracious enough to meet and mingle with people afterwards. I think we're probably caught up for the year on our entertainment after two nights out LOL
*************************

For the past two weeks I've been working on a Round Robin project for my local art group and finally finished it! 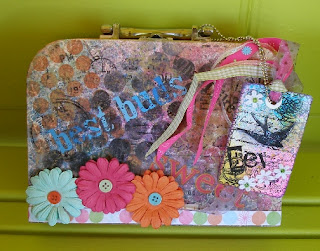 We each picked something to have each other alter....I had picked a wooden painter's palette and had each person add something to it of themselves....Someone else picked a small suitcase from Big lots. There was a suitcase for each of us to alter. It started out looking like it had flowered wallpaper on it so out came the gesso and I painted the entire outside, then of course I used my Color Mists on the outside and inside.....once that was dry I used the mega size punchinella and chalk inks to add some depth and then stamped with large size postal stamps from Ma Vinci stamps with black staz on ink and then I stamped with Krylon gold leafing over that. I also added some rub ons I had....all of what I used to decorate the outside and inside was all stuff I already had. 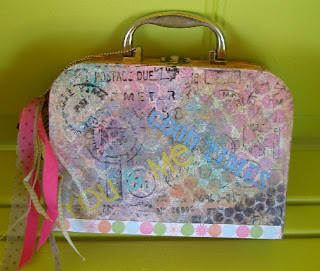 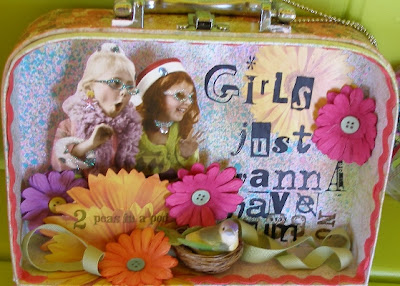 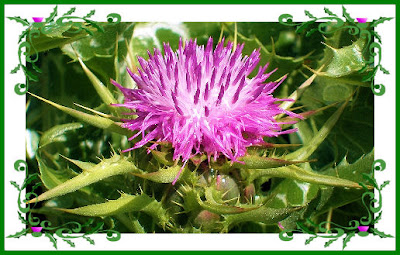 There's been no time for art, but how about a couple of beautiful pictures I took recently. I love thistles and my son collected the seeds from a thistle plant he brought home and grew these for me. How can something look so beautiful yet be so lethal! Click the link below to read more about thistles:
http://www.scotshistoryonline.co.uk/thistle/thistle.html 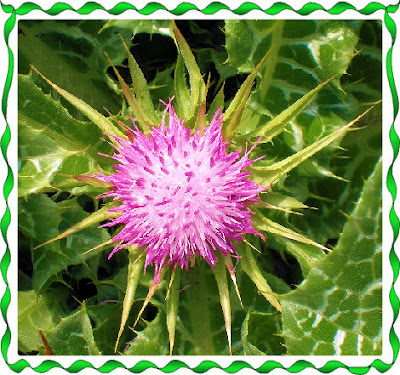 I decided to try Susan's tutorial and although it didn't turn out like hers I'm happy with my finished piece....I started out with a 16x20 gessoed Masonite board...incidental this is the first time I've ever done anything this big Whoa! after picking small leaves I soon realized I was gonna need bigger leaves so I used some off of a plant that has big sturdy leaves....I sprayed base colors like Susan did and then added my leaves and sprinkled rock salt around and let it air dry and used the heat gun on it...what can I say I get impatient :-) 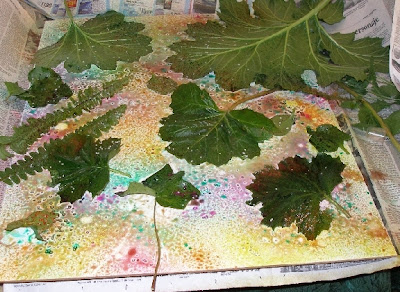 After removing the leaves it looked okay but seemed to need more depth so I outlined the impressions of the leaves with some thinned down gesso and a liner brush then sprayed more Color Mists. I continued this several times and then decided to spray the leaves themselves and then press them onto the board over the areas that I had outlined and I really liked the results I achieved doing this so I repeated it 3 or 4 more times using the heat gun to dry in between spraying and stamping with the leaves until I was happy with the end result which has a lot of texture to it from all the layers. I then sealed it with PYMII...I'm not sure which way I like the piece vertical or horizontal...what do you think?
Fractal Leaves 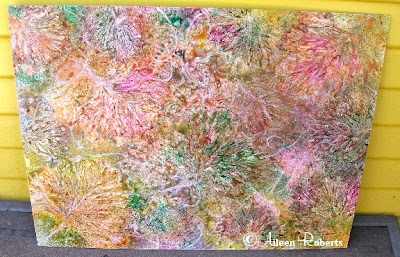 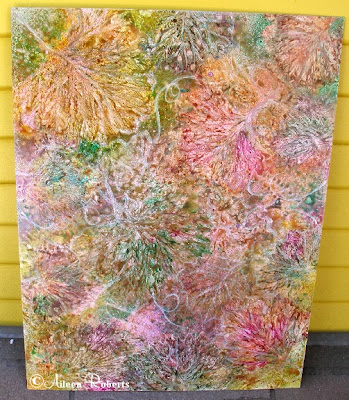 Click away now if you don't want to read about my shameless self-promotion....okay don't say I didn't warn ya! I just received the May/June issue of Altered Arts Magazine and it has a wonderful interview/article written by Clara on Outside The Margins and me as an artist...not only that my Color Mists were featured in the Hot Products Whooohooo! if none of the above gets you excited to buy it (can't say as I blame you really LOL since its all about me) but there is a great article and examples of movable ATCS and a wonderful article on Kid's Altered Books.
If your interested in ordering the May/June issue click the following link:
http://www.outsidethemargins.com/zineorder.html 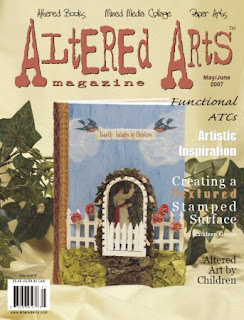 Here's a tag I made for a friend using Kristy's great new For The Birds stamp sheet from TimeToStamp. I used what else but Color Mists for the background on glossy photo paper and black Stazon ink. The flowers are cut from a piece of cloth trim, and I sewed the beads on. I stamped another image of the bird and cut it out and added pop dots to give it some dimension.
FRONT 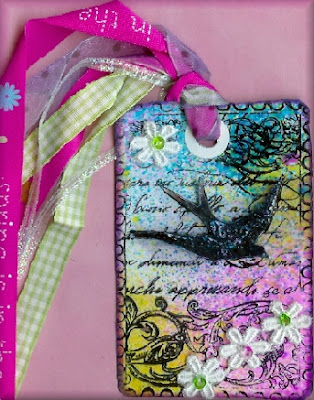 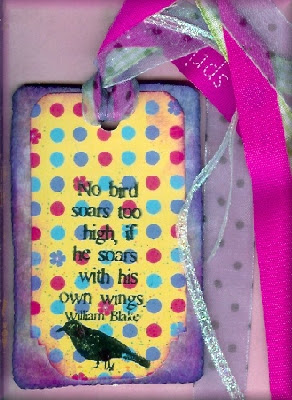