Email ThisBlogThis!Share to TwitterShare to FacebookShare to Pinterest
Labels: Halloween

Well the dust has settled the painters have cleaned up, the ladders are gone, and our house is no longer naked! It was a long week with a crew of painters scraping and sanding and finally painting but the end result is a VERY bright house. I'm pretty sure from the looks on our neighbors faces it wasn't what they were expecting and I myself have had to get use to the large scale brightness but it sure does look good with a new set of clothes on LOL I even got a new door and light to go with it. If you want to see the end result first put your sunglasses on and click the link below:

Show me the light!"

I live in a SpookyLooking House LOL

What a bustle of activity yesterday the painters descended upon our house armed with ladders and scrappers and went to town and man did they make a big dent in the scrapping. We started this summer on the worse side of the house, and I finally convinced hubby that it was just too big a job for him and the boys (I really didn't want it taking 3 years to paint!). The boys did learn to scrape paint and they will be helping paint the garage which is good they can chalk it up to more life experiences they may need to know as an adult. After yesterday's scrapping our house now looks like a Spooky Haunted House but one day it will become a beautiful BRIGHT swan painted yellow and eggplant with a lime green side door which is the door we usually use. I decided to leave the front door the beautiful wood that was beneath the paint after they stripped it.
Yes, I'm sure we will be oh so loved by the neighborhood LOL

Check out the pictures I took below...I made one in black and white and it looks like something out of a Alfred Hitchcock movie or some creepy Halloween movie LOL

I finished another piece for a local boutique I'm participating in with other local artists. This is a 12 inch tall Celtic Mermaid. I covered her with paper I made using my Color Mists and gesso and then sealed with soft gel medium. I went back over her when she was dry with some silver leafing pen. The hair is added by drilling holes and inserting the fibers.

As you can see I've gotten some of my links back over there <--- if I've forgotten your link or you would like to exchange links please email me otm@outsidethemargins.com
Posted by Aileen at Saturday, October 21, 2006 No comments:

Ack what the heck happened to all my links I changed over to the new Beta Google version and lost all my blog links! If I shared or had your link please email me and send it to me again or if you would like to exchange blog links otm@outsidethemargins.com.

Better yet if you know how I can get back my old links please PLEASE let me know! HELP~
Posted by Aileen at Friday, October 20, 2006 No comments:

WOW am I ever lucky!

I feel so lucky and honored! Why because I was given a belated birthday present that is probably the most awesome gift I've ever received and what makes it even better is that two friends made it for me!

Introducing my Junque Angel created by Bev Martini and Kris Henderson. Yes this is a full size guitar don't let the pictures fool you she's a big girl :-)
(Click the pictures to enlarge)

I wish I could say my trip to Art & Soul was fabulous but it wasn't it was though very memorable I will say that! LOL After being up since 1:30 am the night before we flew to Portland and had no problems in the airport or with security whatsoever which was very nice, of course we spent longer in the airport waiting around then in flight because the flight is so quick from California to Oregon! We even landed both ways ahead of schedule. We arrived at the hotel and checked in, took the shuttle over to the other hotel and registered for A&S and dropped our altered berets off. I met other artist whom I've admired their art or who I'm friends with and then we spied a vendor table with some new products we quickly tried to contain our drooling since we were in public and ogled over the mixed media paints from Stewart Gill from Scotland. I heard someone refer to these paints as Lumieres on steroids and I'd have to agree they truly are! Next we went to our evening class eager to learn the Viking weave bracelet with sterling silver wire. HA! this is not a class you take after being up for 17+ hours LOL it was a very complicated class and very intricate and the instructor hadn't taught it enough or perhaps at all to fine tune it for easy teaching. I invented my own weave pattern I was told LOL trust me it was not pretty LOL. Drinks after with friends and then off to our hotel. The next day was my Precious Metal Class (PMC) with Sherri Haab and Wendy they were both friendly and knowledgeable and I enjoyed creating with the PMC, we made charms for a bracelet (for those that don't know PMC is a silver clay and when fired in a kiln the clay binder burns off and your left with just the silver metal). We also were able to use polyclay or resin to fill some of our pieces but I opted to just antique my charms for the time being (see picture below). 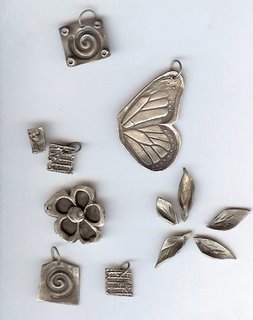 Okay so this was a long day but the class seemed good I took the shuttle back over to my hotel and waited to meet up with my sister but by the time I got over there I started feeling sick to my stomach and before I knew it I spent the next 12 hours vomiting I can't remember the last time I was ever that sick! So Friday and Saturday I was sicker then a dog and wished I was home! I missed my class I was most excited about on Saturday with Sherilyn Miller and vendor night *sniff* by Sunday I was able to keep liquids down but It had now moved to my lower intestines the flight home was not fun to say the least and it seemed to take forever It wasn't' until Tuesday that I didn't hurt all over and feel like something the cat dragged in. I thought my family had been spared getting sick since they kept their distance and pretty much acted like I was a leper but by late Wenesday night Spencer had woke up sick and it hit him just as hard as it did me and by Thursday Morgan was sick and then hubby not quite as bad thankfully but enough for him to miss two days of work first time he has in the 18 years I've known him! What ever this stuff is its one nasty bug that I wouldn't wish on anyone!

So I hate to say it but just the thought of A&S and Portland, Oregon makes me sick at this point....hopefully that association will wear off and I can experience A&S on a more healthy note!
Posted by Aileen at Tuesday, October 17, 2006 No comments:

Yep, I've begun the count down until I leave for Art & Soul in Portland, Oregon! Its just a little more then 24 hours!

I can finally let myself get excited now that I've caught up on shipping and packing and all those little details that have to be taken care of!

This year's theme for Art & Soul is Paris in Your Soul and we were each sent a beret to decorate or alter. Below is my beret that I turned into a fairy bird house of sorts and my sister sculpted hers into lips which turned out sooo awesome! Check them out: 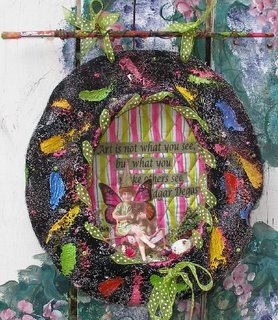 Here's an up close shot of my fairy: 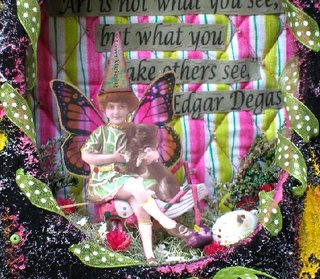 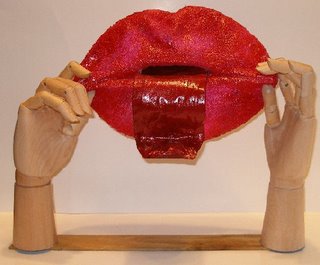