Getting a BIG Kick out of my new toy!

I recently took the plunge into the world of die cuts and
bought a Sizzix BIGKick, and man am I getting a
big KICK out of using it :-)

I had been wondered about the various die cutting machines for awhile now, but it all seemed so overwhelming. I pondered over which one was best, and which one did what, as they came out with new ones. I kept waiting and wondering afraid I would make the wrong decision and regret it.  Then I  found a comparison chart that really helped me to decide (click HERE if you are as curious & confused as I was).  I  had already decided that I didn't want an electric one that could have things possibly go wrong (or break), nor did I want one that was going to cost an arm an a leg.  I also, didn't want one that I had to think real hard about how to use it, at this point in my life, I just wanted to be able to take it out of the box and create (in the past I would have embraced the challenge of learning something new...I'm beyond that thrill now). What I really love about the BIGKick is that it can take all different dies and impression plates from various companies and with really very little effort you can crank it through.

I re-purposed a cardboard 6 pack bottle carrier that I had saved from Thanksgiving (it had such great graphics on it), and created a autumn themed card using my BIGKick.   I first chose one of the dies from my Spellbinder's Nestabilities (Label Eight Set) and cut out the basic shape then used a flower die from Sizzix to cut out the flower.  I also put the orange bottle cap through the BIGKick to squish it and it went through like buttah! 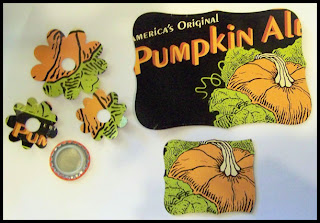 And it went from that to... 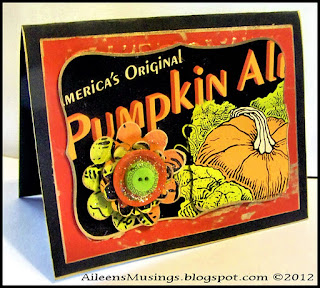 THIS
Yep, I'm am loving my new toy,
the recycling won't be safe now!